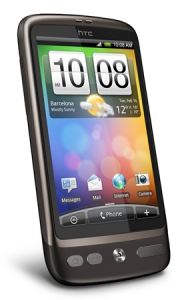 I’ve played with some of the touch screen devices that Nokia have put out, the 5800 and the N97 and even from my brief exploration it was obvious to me that S60 didn’t quite cut it as an OS for touch screen devices. Caught out by Apple and their release of iPhone OS, Nokia added touch screen functionality into S60 5th Edition and made a complete hash of it. Instead of building the OS from the ground up to revolve around interaction with a touch screen, Nokia built on top of S60, originally designed for devices with keyboards and physical buttons, essentially a legacy OS the interface doesn’t feel fluid or intuitive.

I’m a Mac user so the obvious choice should have been an iPhone, don’t get me wrong I like iPhone OS and it ticks all the usability boxes but I’ve never liked the idea of someone controlling the content I put on my device, I’ve bought it, I want to do what I want to it. The Apple App Store is truly amazing and it’s done amazing things to drive the uptake of smart phones but I want full control from end to end.

I got a HTC Hero as an upgrade handset from Orange, I’d read a lot about Android and even though the Hero only had Android 1.5 I was still impressed with the way it worked. It’s a very connected OS to use, if I’m browsing the web on it I can quickly share a page to a social network or easily select some text to translate via Google. The Market, Android’s equivalent of the App Store has lots to choose from, however I think something has to be done to stop it being flooded with badly coded apps, something Apple wins on.

At this point I was pretty much sold on Android so I decided to get a HTC Desire which currently has Android 2.1, better for me as we use Microsoft Exchange at work and I like to keep my calendar and email synced on my device, something that didn’t work perfectly on 1.5. The AMOLED screen on the Desire is simply stunning indoors and at night but outside in the sunlight it’s practically unusable. HTC have done a good job with their Sense interface and social networking sites such as Facebook and Twitter integrate with it well, my one moan about this is that no matter what I do all my Facebook contacts are synced to the phone book on the phone, I’d like to keep these separate.

The in-built web browser works well and renders pages quickly, I had Opera Mini on my N96 so I installed it on the Desire too but I increasingly find myself using the in-built browser as it’s just as fast if not faster. I also couldn’t seem to find how to turn Turbo Mode off in Opera Mini, Opera provide a service that pre loads and compresses web pages to reduce the use of bandwidth. This however means sites see your visit coming from Opera’s servers located outside of the UK, stopping access to some sites that that need your IP address to be in the UK.

Whilst I’m on about the web, the ability to use the Desire as a 3G modem is only supported on Windows, you can use paid for third party software but I’d love to see native support for Linux and OS X, either by USB or Bluetooth but at the moment the stack doesn’t support Bluetooth DUN or PAN. However browsing full web pages on the Desire isn’t a chore and unless I was desperate to use a real keyboard it’s just as easy to use the Desire.

The 5MP auto focus camera is OK, it struggles in low light and pictures are sometimes blurred when viewed at 100%, but for quick uploads to Twitter it’s fine. Google Maps sometimes feels slow to load map data even when using the phones WiFi to a broadband connection but Latitude works well and even the new navigation option got me to where I’ve needed to be speaking out road names and directions.

Mail works well, Exchange support has improved in 2.1 but still has a long way to come. It doesn’t support all of Microsoft’s security policies but the bug(?) is being tracked by Google. My Exchange calendar syncs fine and I can respond to and create meeting requests from the device, also worth mentioning is the ability to access the company directory available through Exchange.

So maybe I’ve still not found the perfect phone but the Desire is almost there. The recently leaked 4th generation iPhone looks like it could be a good device but for some reason I still don’t feel I can trust Apple! Let’s see what Android 2.2 brings!

Advanced Task Killer – Not sure this is really needed as Android dynamically closes apps as the system needs more RAM, but I like knowing that apps I’m not using aren’t using data whilst I’m out and about. Although I’ve got an unlimited data plan it’s good to help preserve battery life.

beebPlayer – There’s no official BBC iPlayer app for Android, beebPlayer does a fantastic job solving this problem. Access to all the iPlayer content and links to live BBC TV channels and radio.

twidroid – This app has a much nicer interface than the bundled Twitter application Peep. There’s a paid “Pro” version of the app that includes video upload but the free version still does search, trends, URL shortening, Image upload and lots more.

Barcode Scaner – Simple to use barcode scanner that can also read QR Codes.

ShopSavvy – Scan a barcode and this app lets you know if you can get the item cheaper online or locally.

Shazam – Give it a few seconds of music and Shazam identifies the artist and track.

Qik – Android version of Qik, record and upload video to the web.

FileGo – Free file manager, does everything you need it to!

Data Counter Widget – A simple small widget to show how much data I’ve used over WiFi and the mobile network, you can set it to reset automatically on your billing day.